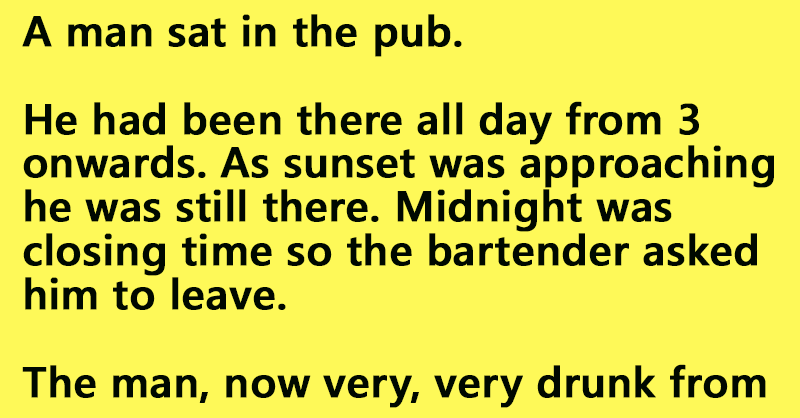 A man sat in the pub.

He had been there all day from 3 onwards. As sunset was approaching he was still there. Midnight was closing time so the bartender asked him to leave.

After an exhausting crawl he had finally managed to crawl up the steps to the door and somehow unlock the door. Once inside, and with great effort having locked the door again, he decided he would get a telling off from the misses if he woke her by coming up the stairs and lay on the couch.

Next morning he was woken up by the misses, who was clearly furious: “Have you been drinking all day again?” She hissed.

The man said:” ‘course not darling.”

She got angrier and said: “ don’t lie! The bar called… you forgot your wheelchair there again!”

Two Men At An Irish Pub.

Two men were sitting next to each other at Murphys Pub in London. After a while, one bloke looks at the other and says, I can’t help but think, from listening to you, that you’re from Ireland

The other bloke responds proudly, Yes, that I am!

The first one says, So am I! And where about from Ireland might you be?

The other bloke answers, I’m from Dublin, I am.

The first one responds, So am I!

Mother Mary and begora. And what street did you live on in Dublin?

The other bloke says, A lovely little area it was. I lived on McCleary Street in the old central part of town.

The first one says, Faith and it’s a small world. So did I! So did I! And to what school would you have been going?

The other bloke answers, Well now, I went to St. Marys, of course.

The first one gets really excited and says, And so did I. Tell me, what year did you graduate?

The first one exclaims, The Good Lord must be smiling down upon us! I can hardly believe our good luck at winding up in the same place tonight. Can you believe it, I graduated from St. Marys in 1964 my own self!

About this time, Vicky walks up to the bar, sits down, and orders a drink.

Brian, the barman, walks over to Vicky, shaking his head and mutters, It’s going to be a long night tonight.

Vicky asks, Why do you say that, Brian?

The Murphy twins are drunk again.

A wise old gentleman retired and purchased a modest home near a junior high school.

He spent the first few weeks of his retirement in peace and contentment.

Then a new school year began.

The very next afternoon three young boys, full of youthful, after-school enthusiasm, came down his street, beating merrily on every trash can they encountered.

The crashing percussion continued day after day until finally, the wise old man decided it was time to take some action.

The next afternoon, he walked out to meet the young percussionists as they banged their way down the street.

Stopping them, he said:

“You kids are a lot of fun. I like to see you express your exuberance like that. In fact, I used to do the same thing when I was your age.”

” Will you do me a favour? I’ll give you each a dollar if you’ll promise to come around every day and do your thing.”

The kids were elated and continued to do a bang-up job on the trash cans.

After a few days, the old-timer greeted the kids again, but this time he had a sad smile on his face.

“This recession’s really putting a big dent in my income,” he told them.

The noisemakers were obviously displeased, but they did accept his offer and continued their afternoon ruckus.

A few days later, the wily retiree approached them again as they drummed their way down the street.

“I haven’t received my pension cheque yet, so I’m not going to be able to give you more than 25 cents. Will that be okay?”

“If you think we’re going to waste our time, beating these cans around for 25 cents, you’re nuts! No way, mister. We quit!

And the old man lives peacefully.

SHARE now with your friends and loved ones – maybe it will catch them out!