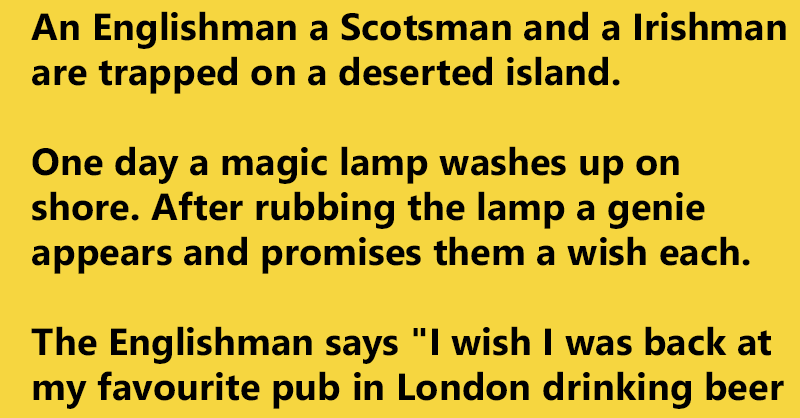 An Englishman a Scotsman and a Irishman are trapped on a deserted island.

One day a magic lamp washes up on shore. After rubbing the lamp a genie appears and promises them a wish each.

The Englishman says “I wish I was back at my favourite pub in London drinking beer with my mates”. The genie wisks him away.

The Scotsman says “I wish I was back in Edinburgh drinking a bottle of whisky making love to my wife”. The genie again wisks him away.

The Irishman is left and says “It’s a bit lonely here now I wish my two mates were back here with me”.

An Englishman and an Irishman walk into a bakery.

The Englishman steals 3 buns and puts them into his pockets and leaves.

He says to the Irishman, “That took great skill and guile to steal those buns. The owner didn’t even see me.”

The Irishman replied, “That’s just simple thievery, I’ll show you how to do it honestly and get the same results.”

The Irishman then called the owner of the bakery and said, “Sir, I want to show you a magic trick.”

An Englishman And An Irishman Walk Into A Bakery.

The owner was intrigued so he came over to see the magic trick.

The Irishman asked him for a bun and then he proceeded to eat it.

He asked 2 more times and after eating them again the owner said, “Okay my friend, where’s the magic trick?”

The Irishman then said, “Look in the pockets of the Englishman”.

An Englishman, a Scottish man, and an Irish man all walk into a pub with their wives.

They all sit down and order a cup of tea.

The Englishman looks to his wife and says “could you pass the honey, honey?”

The Scottish man thinks to himself how clever that was, then turns to his wife and says “could you pass the sugar, sugar?”

The Irish man – not wanting to be out witted by the other two men – looks over at his wife and says.

“Could you pass me the milk ye fuc*ing cow?”