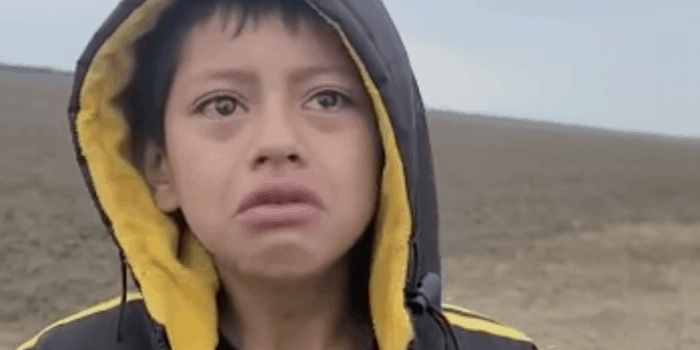 RIO GRANDE CITY, Texas (KABC) — Heartbreaking video has been released showing a young migrant boy walking by himself in Texas near the border after he says he was abandoned by a large group he was traveling with.

A Border Patrol agent came across the boy along a road on a rainy day in La Grulla, a small community near Rio Grande City just north of the Texas-Mexico border.

The boy is sobbing as he explains to the agent that he was traveling with a group and he was abandoned, and said he was afraid of being robbed or kidnapped.

“Can you help me?” the boy says in Spanish as the agent approaches.

“What happened?” the agent asks.

“I was with a group of people and they dumped me and I don’t know where they are.”

“Scenes like these are all too common, as smugglers continue to abandon children in desolate areas, with zero regard for their well-being,” a CBP spokesperson said.

The Facebook post reported that the boy was brought to the Border Patrol’s Donna facility, and his family was contacted.

The CBP noted that he was also fed and medically screened and will be transferred to custody of the U.S. Department of Health and Human Services, Office of Refugee Resettlement.

The incident happened as a new spotlight is focused on the border and particularly the issue of unaccompanied migrant children.

The Biden administration has asked several cities,, to provide temporary shelter for unaccompanied children as it attempts to address the crisis.