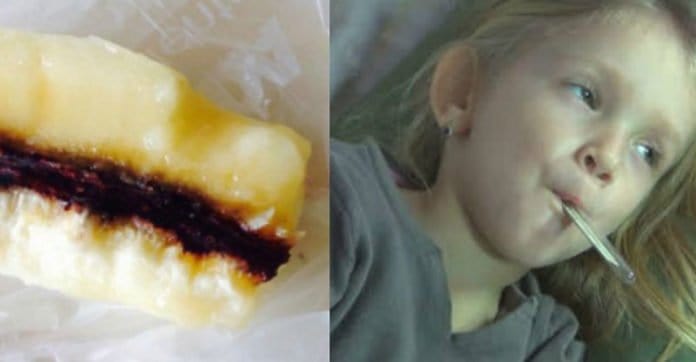 Fruits are healthy for people of all ages and are vital to a balanced diet.

But if the piece of fruit involved is in a bad condition, it can affect someone’s health for the worst.

Lissa Merlin’s daughter Dionne, 8, was enjoying a banana from Morrisons supermarket at her home in the UK when she suddenly became ill.

Merlin was startled, knowing that Dionne had been completely fine prior to eating the fruit.

Merlin rushed to check on the bananas that they had, and when cut open, the bananas revealed dark red streaks down their centers.

She then took to Google to see what the streaks meant, and quickly discovered that they were riddled with the fungus Nigrospora.

Leaping into action, Merlin raced to get her daughter to a hospital.

Thankfully, this type of fungus doesn’t result in lasting harm, with most discomfort being psychosomatic, so Dionne made a full recovery and was discharged from the hospital.

Others have also reported purchasing fruit with this fungus from Morrisons and another supermarket called Lidl.

Upset and concerned, Merlin urged these stores to perform a more thorough check of their fruits.

Commenters on Merlin’s Facebook post reasoned that it was not possible to check every single piece of fruit in the grocery store.

They suggested that the best idea would be for buyers to be careful of the food that they eat instead.