Married or not you should read this…

It does not matter if you are single or married, you should read the following story. It is a story about marriage. And, it will get you thinking about life and things that matter as well as those that do not.

When I came home that night, as my wife served me dinner, I grabbed her hand and said, “I have something to tell you.” She sat down and ate quietly. I watched and saw the pain in her eyes. Suddenly, I did not know how to open my mouth, but I had to tell her what I thought: “I want a divorce.” She did not seem upset by my words and asked me softly, why?

Rather than answering, I ignored her question. This made my wife angry, and she threw away the chopsticks she was eating with. She furiously shouted: “You are not a man!”

We did not talk that night and she cried. She wanted to know what happened to me. She couldn’t understand why I was putting an end to their marriage.

It was something about our marriage, but I could not answer exactly. It happened that she had lost my heart, and I had another woman named Joan. I did not love my wife anymore, but I’m sorry for her. With a great sense of guilt, I wrote a divorce agreement and with this agreement, she got the house, the car, and 30% of our business.

She looked at the agreement and threw it away. She spent 10 years of her life with me and now we were like strangers. I felt sorry for her, for all the lost time, the energy was not the same, but it could not change. I loved Joan. Suddenly she started screaming. The idea of divorce was now clearer to me.

The next day, I came home and found myself writing at the table. I did not eat dinner and went to sleep, I was very tired having spent the day with Joan. When I woke up, my wife was still writing at the table. It did not mind, I turned around and continued sleeping. In the morning, my wife introduced me to divorce conditions: She did not want anything from me but needed a month’s notice before the divorce.

She asked me for a month, we would have to live as if nothing happened. Her reason was simple, our son had a whole month of tests and she did not want to bother him with our broken marriage. I accepted, but she had another request: to agree upon me carrying her to our room like the day we got married. I thought she was going crazy, but that this alone was accepted.

My wife and I had not any physical contact since I expressed my intention to divorce. When I took her to the front door the first day, we both feel bad. Our son walked behind with clapping and saying: Dad is carrying mom is his arms! His words gave me a lot of pain.

I walked 10 meters with my wife in my arms. She closed her eyes and said softly: Do not talk about our divorce to our son. Then I went to work. I drove alone to work. The second day, we were both more relaxed.

She leaned against my chest, I could feel the fragrance of her blouse. I realized that I had not looked at it carefully. I realized she was no longer so young, had some wrinkles and gray hairs… that was notable damage to our marriage. For a moment, I thought and I asked myself: what was it I did? On the fourth day, I felt some affection was returning between us. This was the woman who gave me 10 years of her life. In the fifth and sixth day, it continued to. I said nothing about Joan.

Every other day it was easier to carry my wife and month was running. I thought I was getting used to her weight. One morning, she was looking for what to wear. She had tried many dresses on, but they were all too big. At that moment, I realized she was very thin, and that was the reason that I did not feel her weight load. Suddenly I realized that I had provoked much pain and bitterness.

Without realizing it, she touched my hair. Our son entered the room and said: Dad, it’s time to take Mom to the door! For my son, seeing his father day after day carry her mother to the door, that had become an essential part of his life. My wife hugged him, I covered my face. I was afraid I changed my thinking about divorce. And holding my wife in my arms to the door, it felt like the first day of our wedding.

She stroked my neck softly and naturally. I held her strong, just like our wedding night. I hugged her and did not move, but she was so thin and that made me sad. The last day I just hugged her and did not want to move, I told her I did not realize that we had no privacy. Our son was at school. I drove to the office, I left the car without closing the door, I climbed the stairs, Joan opened the door, and I said, excuse me, sorry, I do not want to divorce my wife.

Joan looked at me and asked me if I had a fever. I said:

My wife and I love each other, it was that we were doing everything as a routine and boring. We did not value the details of our life since I started carrying her to the room. Joan began to mourn, slapped me, and closed the door. Going down the stairs, I went into the car and went to the florist.

I bought flowers for my wife. The girl in the florist asked me what to write on the card? I told her to put: I will carry you every morning until d-e.a.t.h parts us. I arrived at my house with flowers in my hands and smile, and ran up the stairs; when I went… I found my d-e.a.d wife. My wife was fighting cancer and I was so busy with Joan, so I did not realize. My wife knew she was dying and that is why she asked for a month’s notice before the divorce so that our son will not have bad memories of divorce.

At least in my son’s eyes, the memory of his father who was a good husband who loved his wife will stay.

These small details are what matters in a relationship, not the house, the car, the money in the bank. All this only creates an environment that you think will lead to happiness, but really… is not. Try to keep your marriage happy. All the stories of failure are equal; they give up when they are about to enter to success. We do not know what we have until we lose it.

It’s not a true story, but it makes sense, so I just had to share it here.

If you are married or if you are still single, we hope this made you think a little.

The post Marriage Story appeared first on Wake Up Your Mind. 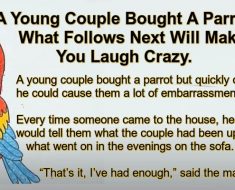