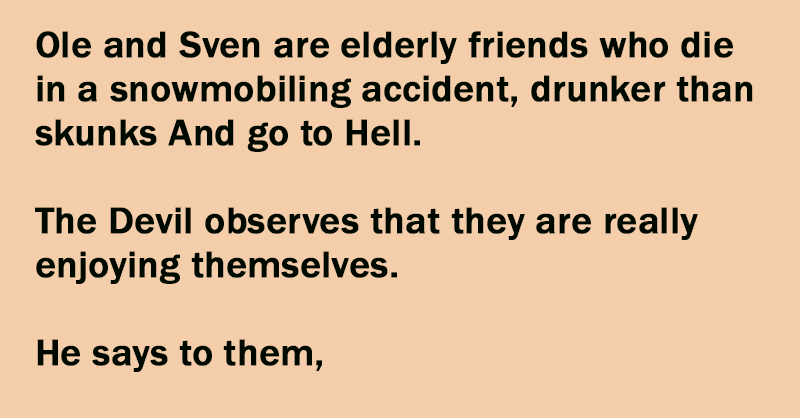 Ole and Sven are elderly friends who die in a snowmobiling accident, drunker than skunks And go to Hell.

The Devil observes that they are really enjoying themselves.

He says to them,

‘Doesn’t the heat and smoke bother you?’

Ole replies, ‘Vell, ya know, ve’re from nordern Minnesooota, da land of snow an ice, an ve’re yust happy fer a chance ta varm up a little bit, ya know.’

The devil decides that these two aren’t miserable enough and turns up the heat even more.

When he returns to the room of the two from Minnesota, the devil finds them in light jackets and hats, grilling Walleye and drinking beer.

The devil is astonished and exclaims,

‘Everyone down here is in misery, and you two seem to be enjoying yourselves?’

The devil is absolutely furious.

He can hardly see straight.

Finally he comes up with the answer.

The two guys love the heat because they have been cold all their lives.

The devil decides to turn all the heat off in Hell.

The next morning, the temperature is 60 below zero, icicles are hanging everywhere, and people are shivering so bad that they are unable to wail, moan or gnash their teeth.

The devil smiles and heads for the room with Ole and Sven.

He gets there and finds them back in their parkas, bomber hats, and mittens.

They are jumping up and down, cheering, yelling and screaming like madmen.

The devil is dumbfounded,

‘I don’t understand, when I turn up the heat you’re happy. Now its freezing cold and you’re still happy. What is wrong with you two?’

They both look at the devil in surprise and say,