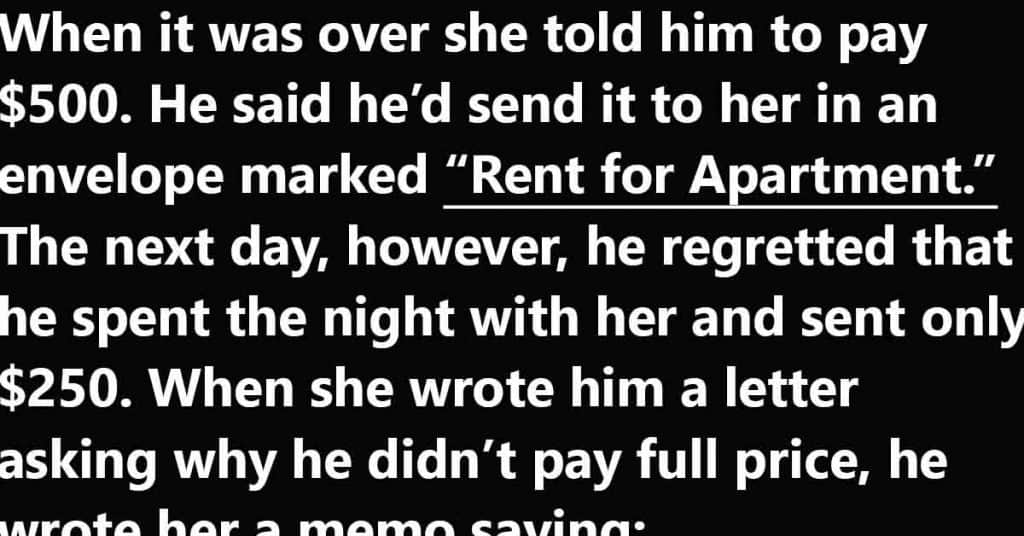 A man decided to spend the night with a pros titute.

When it was over she told him to pay $500. He said he’d send it to her in an envelope marked “Rent for Apartment.”

The next day, however, he regretted that he spent the night with her and sent only $250.

When she wrote him a letter asking why he didn’t pay full price, he wrote her a memo saying:

“Dear lady, I am including a check for $250 for your rent. I am not sending you the sum we previously agreed on, as before I rented the apartment I was given the impression that:

1. The apartment had not been used before.

2. It had adequate heating.

3. It was small enough for me to feel comfortable in it.

Instead, I found the apartment had been used many times before, had no heating and was too big for me!”

Quite pleased with himself, he sends the letter.

A few days later the prostitute responds in her own letter, saying the following:

1. You should have known such a beautiful apartment had been rented before.

2. The apartment did have adequate heating. You just didn’t know how to turn it on.

3. The apartment was the perfect size. You just didn’t have large enough furniture to fill it.

You are hereby asked to pay the rent in full or I will be forced to contact your current landlady!”