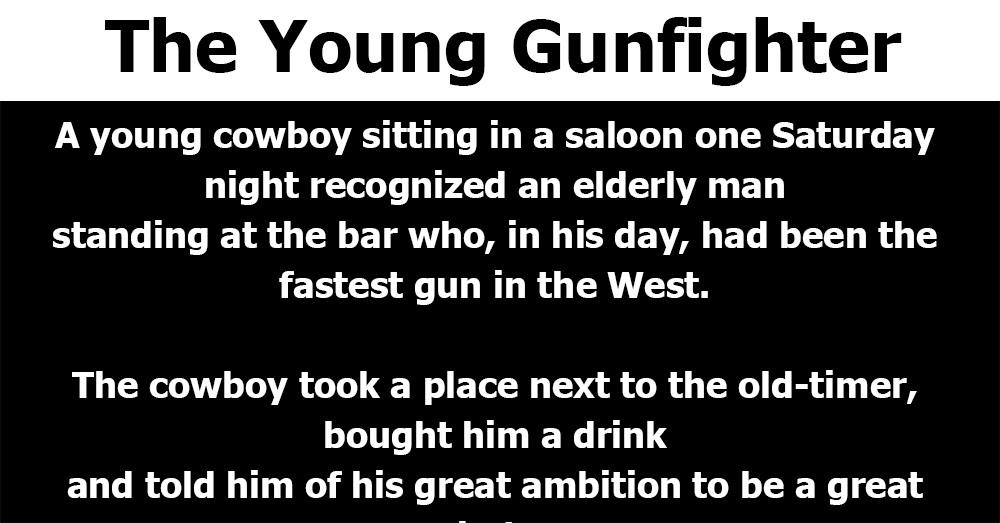 A young cowboy sitting in a saloon one Saturday night recognized an elderly man
standing at the bar who, in his day, had been the fastest gun in the West.

The cowboy took a place next to the old-timer, bought him a drink
and told him of his great ambition to be a great shot…

‘Could you give me some tips?’ he asked.

The old man said, ‘Well, for one thing, you’re wearing your gun too high
tie the holster a little lower down on your leg.’

‘Will that make me a better gunfighter?’

The young man did as he was told, stood up,
whipped out his .44 and shot the bow tie off the piano player.

‘That’s terrific!’ said the cowboy. ‘Got any more tips?’

‘Yep,’ said the old man. ‘Cut a notch out of your holster where the hammer hits it
and that’ll give you a smoother draw’

‘Will that make me a better gunfighter?’ asked the young man.

‘You bet it will,’ said the old-timer.

The young man took out his knife, cut the notch, stood up, drew his gun in a blur,
and then shot a cufflink off the piano player.

The old man pointed to a large can in a corner of the saloon.
‘See that axle grease over there? Coat your gun with it.’

The young man smeared some of the grease on the barrel of his gun.

‘No,’ said the old-timer, ‘I mean smear it all over the gun, handle and all.’

‘Will that make me a better gunfighter?’ asked the young man.

‘No,’ said the old-timer, ‘but when Wyatt Earp gets done playing the piano,
he’s gonna shove that gun up your ass, and it won’t hurt as much.