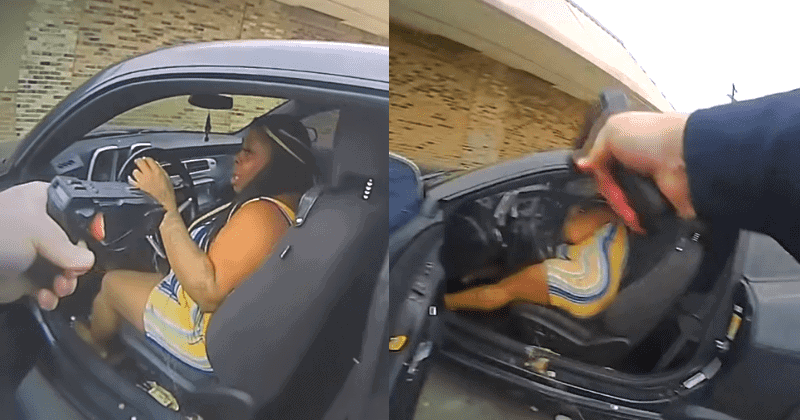 Trigger warning: The story contains details and graphic footage of gun violence that might be distressing to some readers.

While Metro Police Officer Josh Baker was patrolling at around 9:30 am on Friday, March 12, he stopped a black Chevrolet Camaro after learning that the vehicle’s owner was a man who had six outstanding drug warrants in his name. However, after stopping the vehicle, he realized the car wasn’t being driven by the owner, but by a woman named Nika Nicole Holbert.

At first, Nika seemed compliant with the officer’s requests and calmly allowed officer Baker to conduct his search.

“The situation developed from there into a shootout,” MNPD spokesperson Don Aaron said in a press conference, as quoted by FOX 17 News.

During the exchange, Nika made a call to her mother while officer Baker went through the contents of her bag. Inside, he found marijuana as well as a white powdery substance. Not long after that, the scene that was unfolding in a parking lot in Nashville, Tennessee, quickly took a different turn when officer Baker took out his handcuffs to put them on Nika.

“No, don’t put me in handcuffs,” Nika screamed and ran around the car. She managed to grab her bag and jumped back inside the vehicle as she continued to cry, “No.”

“I didn’t do nothing,” the woman shouted.

“You’re about to get tased,” officer Baker told the 31-year-old woman as he struggled to get the situation under control, as reported by Metro.

Within moments, the officer uses his taser on Nika right before she pulled out her gun, as seen in the body camera footage released by the Metropolitan Nashville Police Department on YouTube.

“Ma’am, put your gun down,” officer Baker said, but Nika pulled the trigger and shot him right beneath his bullet-resistant vest.

Officer Baker returned fire and struck Nika, who then went on to pull out of the parking lot and drive off, only to be found wounded a block away after the car ran off the road.

Right after the crossfire, officer Baker was rushed to the TriStar Skyline Medical Center and taken in for surgery. The 14-year-veteran of the police department is expected to survive, but the woman he shot succumbed to her injuries and passed away, according to CNN.

Police spokesperson Aaron said in a statement, as quoted by New York Post, “This investigation is at the early stages and will take time to complete.

Nika’s grieving mother also spoke to News4 about her daughter’s death and said, “As far as I’m concerned, the police killed my daughter.”

“I loved my daughter and she was well-loved and she was no bad person,” the mother added. “She never pulled a gun, never shot nobody before… I need some answers.”

According to WREG News Channel 3, Nashville Mayor John Cooper also released a statement after the gunfire exchange which said, “What happened today is a reminder that being a police officer anywhere can be a dangerous job. My thoughts and prayers are with Officer Baker and with the families of everyone involved.”