JESSA Duggar shared a sweet photo of her newborn daughter Fern after DEFYING HER STRICT family rules by giving birth in HOSPITAL.
The Counting On star, 29, posted a snap of the two-week-old sleeping in a light blue and white babygro. Jessa put a sweet white bow in Fern’s hair and wrapped her in a pink blanket in the adorable shot. Giving birth in a ʜᴏsᴘɪᴛᴀʟ was a ᴄᴏɴᴛʀᴏᴠᴇʀsɪᴀʟ choice as all the Duggar mothers typically welcome their children at home unless there are ᴍᴇᴅɪᴄᴀʟ ᴄᴏᴍᴘʟɪᴄᴀᴛɪᴏɴs. 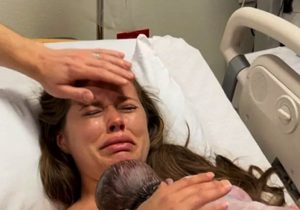 Soon after the birth, Jessa also revealed she had ᴀɴ ᴇᴘɪᴅᴜʀᴀʟ ᴀɴᴅ ʀᴀᴠᴇᴅ about the benefits of the process.

She said the pain-relieving procedure was “so worth it” – despite her parents Jim Bob and Michelle’s strict beliefs against ᴍᴏᴅᴇʀɴ ᴍᴇᴅɪᴄɪɴᴇ.

“Even though I didn’t get my ᴇᴘɪᴅᴜʀᴀʟ till the very last hour before she was delivered, I feel like it was still so worth it. Not only did it help with my ᴘᴜsʜɪɴɢ phase, it took the ᴘᴀɪɴ out of it. What I was really ᴇxᴄɪᴛᴇᴅ about was not being able to feel the after-birth ᴄʀᴀᴍᴘs. Because those things are awful and they get ᴡᴏʀsᴇ with each kid. So I was really ᴇxᴄɪᴛᴇᴅ not to be able to feel that and just be able to enjoy holding my baby.”she said in a YouTube video. 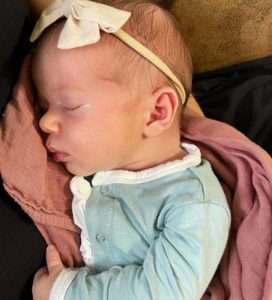 The TLC star added: “And then all that massaging that the nurses do on your ᴜᴛᴇʀᴜs – didn’t feel it. It was nice! So the epidural definitely worked. Was so thankful.”

Jim Bob, 56, and Michelle, 54, were quick to visit Jessa after the birth and take photos with baby Fern, who is their 10th granddaughter. Jessa and Ben revealed in February that they were expecting, after having a “ʜᴇᴀʀᴛʙʀᴇᴀᴋɪɴɢ” ᴍɪsᴄᴀʀʀɪᴀɢᴇ in 2020.

The reality stars told ET in a statement: ”After the ʜᴇᴀʀᴛʙʀᴇᴀᴋɪɴɢ ʟᴏss of a baby last year, we’re overjoyed to share that another little Seewald is on the way! The pregnancy is going smoothly, and both baby and Jessa are doing well. We are so grateful to Gᴏᴅ for the precious gift of a new life! The kids are delighted, and we can hardly wait to welcome this little one into our arms this summer.”

Jessa and Ben tied the knot in 2014, after meeting in church as teenagers. 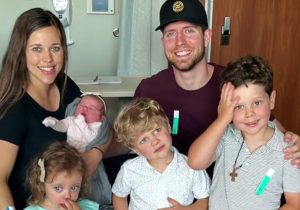