It doesn’t matter how much you love your cats, nobody likes cleaning the litter box. Check out my Litter Robot review to find out why I’m so obsessed with this automatic litter box!

I was given a Litter Robot in exchange for my review but my obsession with this automatic litter box is 100% my own. This post contains affiliate links.

We love our cats! They are super cute, cuddly and most definitely entertaining. The only thing I don’t like about being a cat mom is cleaning the litter box. It’s not like I have a choice though. It has to be done regularly and if I wait too long to clean it, I would get the staredown…

When we got our two kitties, my oldest PROMISED to help clean the litter. I’ll give you one guess how long that lasted! I’d get impatient waiting and would end up just doing in myself to avoid the stink. It was just one more think on my already full plate and I dreaded it. Let’s face it…cleaning the kitty litter is gross!

That’s why we (and by we, I really mean “I”) decided we needed to get an automatic kitty litter. I did a lot of research on-line and kept coming back to the Litter Robot 3. It just seemed to be a step above the others and I really wanted to give it a try! 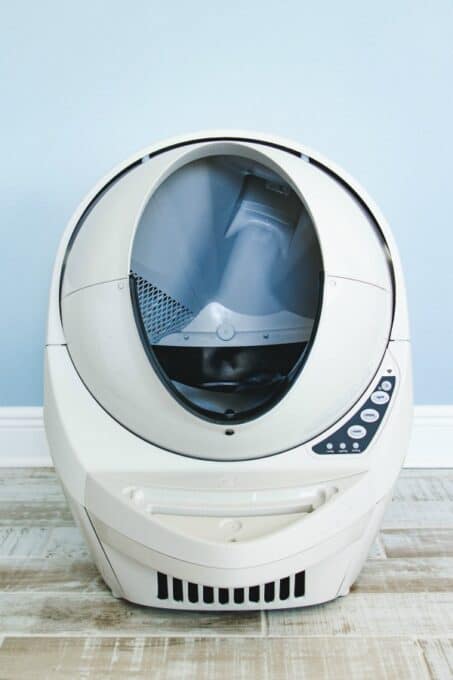 When our Litter Robot arrived, it was a lot bigger than I expected. I’d seen the pictures online but still was a little surprised when I saw it in person.  Luckily we had the perfect spot in our mudroom but it’s just something you’ll want to keep in mind when ordering one for yourself. (You can check the measurements at LitterRobot.com)

Next I  connected it to the app, which is pretty cool (don’t you just love technology?)! The app tells you how full the waste compartment is and even gives a history of how often the cats have used it. I don’t use the history as much now but it was super helpful in the beginning when we were trying to figure out if our cats were using the Litter Robot and how often. You can also get notifications and troubleshoot with the app, though I mostly use it to see when the waste needs to be emptied. 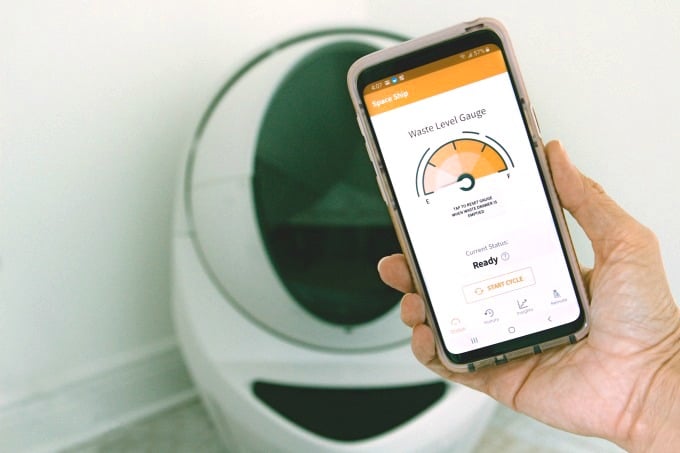 My biggest concern was whether or not my cats would actually use it. I wasn’t too worried about Buddy. He gets into anything he can. 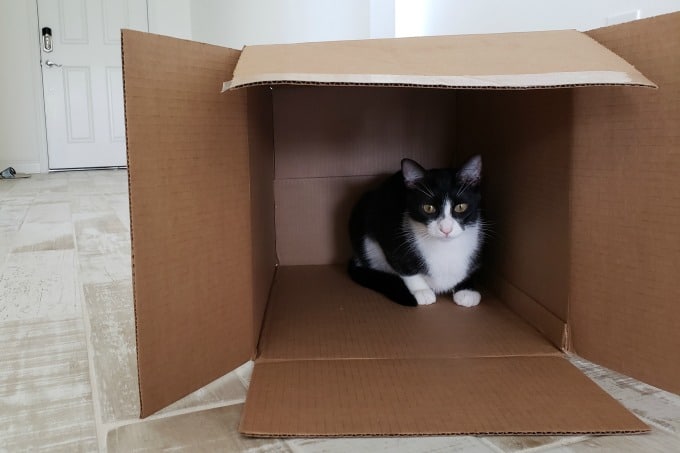 Amelia, on the other hand, likes to play it safe. She’s happy just lounging in bed with her teddy bear and isn’t quite as into exploring. 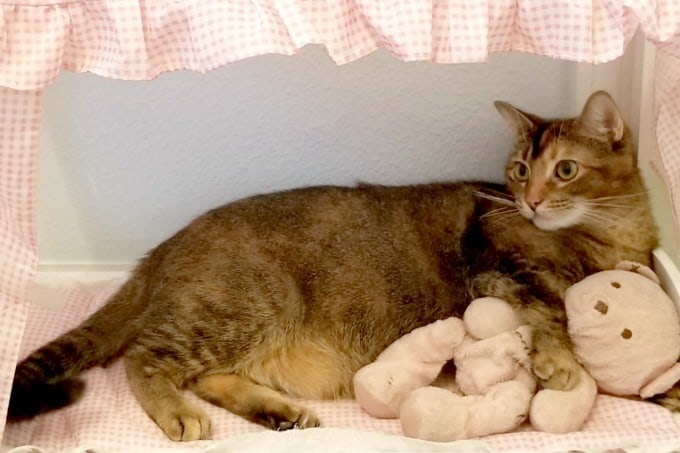 The company has plenty of tips for how to get cats to use the Litter Robot but I started by placing it next to the regular litter box and the food.

Nothing happened for a few days but one day I noticed paw prints inside…someone had gotten curious. The next day, one of our cats finally used it (you’ve never seen a family so happy about cat poop!). Turned out it was Buddy and he continued to switch back and forth between the Litter Robot and old litter box. Amelia was a little more stubborn. 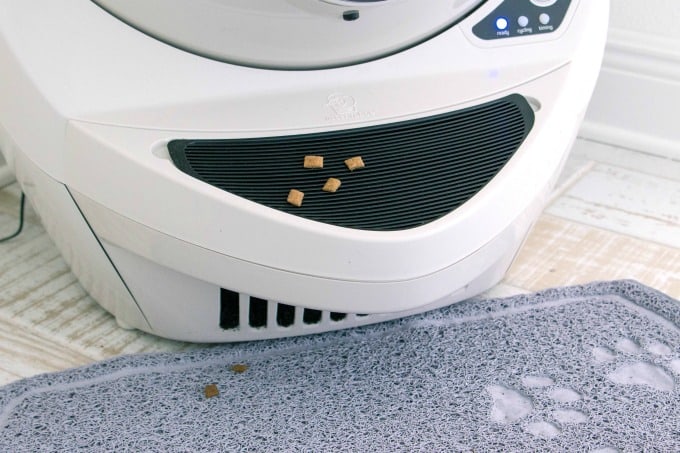 After another week, I moved the old litter further away. Still nothing. I started putting treats in front of the Litter Robot every time we heard Buddy use it so that the humming would be associate with treats. About three weeks after we debuted the Litter Robot, Amelia FINALLY used it. We got rid of the old one and now it’s like they’ve never known anything different.

What do we think? Honestly, we think the Litter Robot is one of the greatest inventions ever! It has made our lives (especially mine) so much easier and I’ll never use any other litter box again!

Not only do I not have to scoop, emptying it is so easy. I just open the compartment on bottom, pull out the bag and replace it with a new one. I actually layer about four bags, adding a little baking soda in between each one. Then when I pull out a bag, I still have three more ready to go. 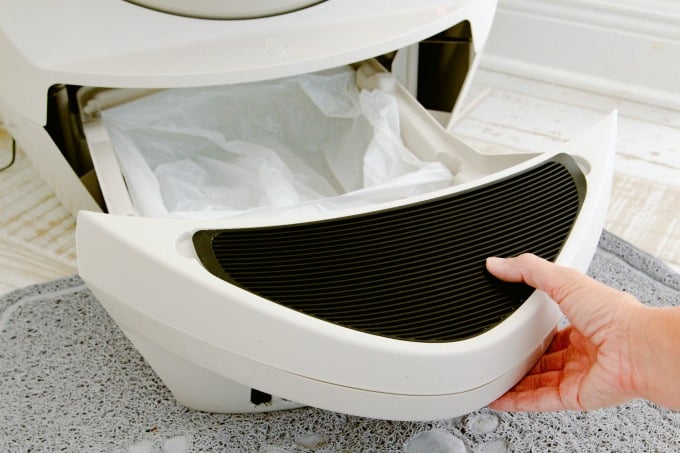 We also don’t have the awful smell that we had with the old litter box. Even though we cleaned it regularly, there was always some kind of  yucky smell. The Litter Robot’s waste compartment is fully enclosed with a carbon filter to reduce odors. you could walk right by the Litter Robot and not smell a thing. It’s SO nice not to have that odor anymore! 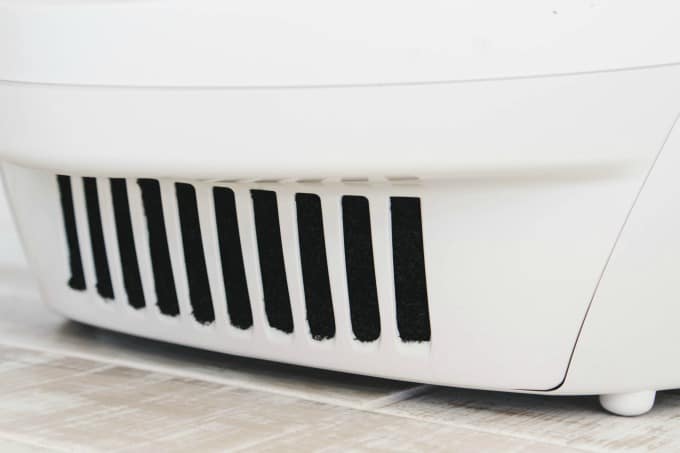 How Does The Litter Robot Work?

When the cat goes inside and does it’s thing, a sensor tells the Litter Robot that a cat is there. It then senses when the cat leaves and after a predetermined amount of time, which you set, the cycle begins. The pod, as we call it, slowly spins around. The litter drains though a filter until a separate compartment while the cat waste falls through a hole in the bottom. The pod spins back around and the litter is deposited back into the pod.

When you’re ready to empty it, just pull out the compartment from the bottom, add a new bag and start all over again.

Do You Need To Buy Special Kitty Litter 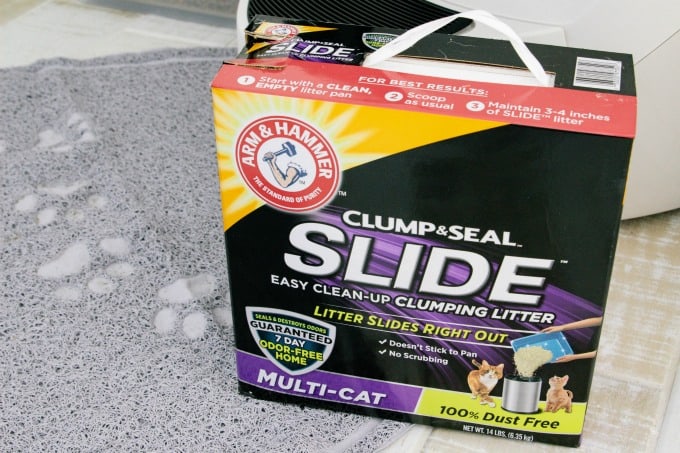 What Kind Of Bags Does The Litter Robot Take

While the makers of the Litter Robot do sell bags, you don’t have to buy them. The Litter Robot comes with a few to start but once I ran out, I tried some other options. I started with grocery bags but they were slightly too small to fit over the clips that hold the bags. I ended up buying medium garbage bags and they fit really well.

As if it’s not easy enough, I have a way to make it even easier! I layered the bags to make things easy. I’d put one bag in, sprinkle baking soda inside to help with odors, then put another bag on top and do the same. I usually layer 4-5 bags so that when I pull a bag out, I don’t have to replace it each time because there’s usually another one underneath…makes life SO easy!

So this was a big one for me because you never know what cats are going to do. They are famously finicky and if your cat decides they don’t like it, well, there’s not much you can do. However, with the Litter Robot, you can try it out for up to 90 days and if your cat still doesn’t take to it, they have a money back guarantee. There’s also an 18 month warranty, just in case.

How Much Is A Litter Robot

So the Litter Robot isn’t exactly cheap. You’ll pay $499 for the Litter Robot 3 with app. If you don’t care about the app, you can get one for $449. I love having the app so that I know how full it is without having to open it but if that’s not important to you, I’d definitely go with the less expensive one. You can also purchase additional accessories but the Litter Robot itself comes with everything you need.

Is The Litter Robot Worth It

Knowing what I know now, would I pay $499 for a Litter Robot 3? ABSOLUTELY! This is the best thing that ever happened to cat owners and if I’d known just how amazing these were, I would have bought one years ago! The humming of the space pooper (our nickname for it because it looks like a spaceship) is like music to my ears. Knowing that I never have to scoop again is pretty awesome. Plus, we no longer have a kitty litter smell and I don’t have to argue with the kids about who’s going to clean it. I really don’t know how I lived without this for so long.

If you want to try the Litter Robot with your own cat, take $25 off by clicking the image below.

I’m not the only one giving a five star Litter Robot review! Just read all the reviews on their website…cat owners seriously love this automatic kitty litter. If you’re as tired of cleaning the litter box as I was, you should definitely check this out!