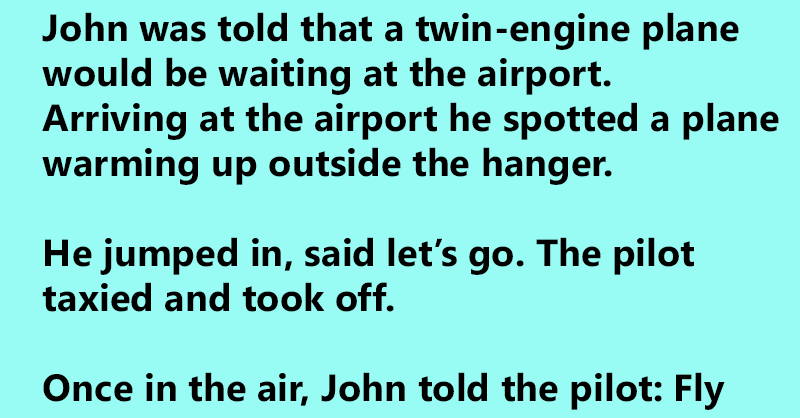 John was told that a twin-engine plane would be waiting at the airport. Arriving at the airport he spotted a plane warming up outside the hanger. He jumped in, said let’s go. The pilot taxied and took off. Once in the air, John told the pilot: Fly low over the valley so I can take pictures of the fire on the hill

John: Because I’m the photographer for a television show. I need to get some close-up shots.

The pilot was strangely silent for a moment, then he stammered So, what You’re telling me is . . . You’re not my flying instructor?

A jumbo jet is just coming into the Toronto Airport on its final approach.

The pilot comes on the intercom,

“This is your Captain. We’re on our final descent into Toronto. I want to thank you for flying with us today and I hope you enjoy your stay in Toronto.”

He forgets to switch off the intercom, and the whole plane can hear his conversation with his co-pilot.

The co-pilot says to the pilot,

Everyone on the plane hears this and immediately begins looking up and down the isles, trying to get a look at the new stewardess.

Meanwhile, the new stewardess is at the very back of the plane.
She’s so embarrassed that she tries to run to the cockpit to turn the intercom off.

Halfway down the aisle, she trips over an old lady’s bag and falls on her face.

The old lady leans over and says: