The Volunteers and the Old Fire Truck 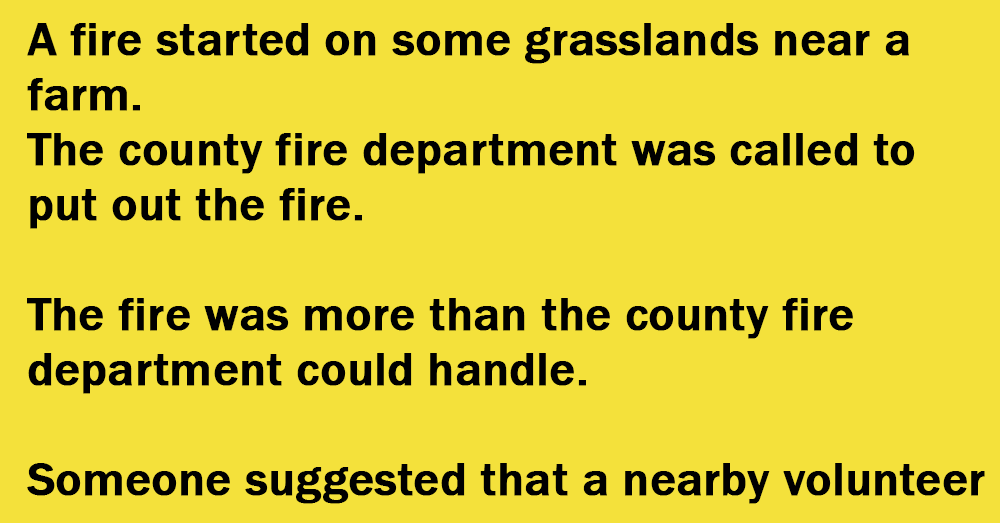 A fire started on some grasslands near a farm.

The county fire department was called to put out the fire.

The fire was more than the county fire department could handle.

Someone suggested that a nearby volunteer bunch be called.

Despite some doubt that the volunteer outfit would be of any assistance, the call was made.

The volunteers arrived in a dilapidated old fire truck.

They rumbled straight towards the fire, drove right into the middle of the flames! The firemen jumped off the truck and frantically started spraying water in all directions.

Soon they had snuffed out the center of the fire, breaking the blaze into two easily-controlled parts.

Watching all this, the farmer was so impressed with the volunteer fire department’s work and was so grateful that his farm had been spared, that right there on the spot he presented the volunteers with a check for $1,000.

A local news reporter asked the volunteer fire captain what the department planned to do with the funds.

“That ought to be obvious,” he responded, wiping ashes off his coat.

“The first thing we’re gonna do is get the brakes fixed on our fire truck!”

An Elderly Couple, A Priest, And A Doctor Walk Into A Bar. –

Little Johnny Was Playing With His Car. –

Two Couples Are Having Their Wedding Reception. –