This post is made possible by the American Lung Association, in collaboration with Sanofi Pasteur as part of an Influencer Activation for Influence Central and all opinions expressed in my post are my own.

While it’s important for everyone to get their flu shot, some are more at risk than others. Are you one of those people?

Why is it that once the holidays are over and the serious cold weather kicks in, people start getting sick left and right. While flu season started in November, people can really get hit hard this time of year. Plenty of people I know have had it this year and we’re doing our very best to avoid it.

Why It’s Not Too Late To Get Your Flu Shot

I worry about the flu because it’s more than just a little coughing and sneezing. It’s a serious illness that’s not only contagious but that can lead to severe health issues like pneumonia. It causes even more problems for those with lung or heart disease. In the most extreme cases, it can even lead to death.

If you don’t think you need the flu shot for your own health, think of those around you. If you get sick, you’re putting your family and others around you at risk of getting the flu from you. Honestly, like most women I worry more about them than myself and that’s the main reason I do it. We have older family members that we see on a regular basis and I’d feel terrible if they got sick because of me.

The American Lung Association has partnered with Sanofi Pasteur to establish the MyShot initiative. They want to remind people that it’s not too late to get your flu shot because even though it’s later in the season now, the chances of getting the flu are still very real.

If you think you don’t need the flu shot because you had it last year, that’s not the case. The U.S. Centers for Disease Control and Prevention recommend getting the flu shot annually because the body’s immune response from vaccination declines over time. Since the flu strains vary every year, the vaccines are adjusted to keep up with those changes.

While it’s still possible to catch the flu after having had the shot, symptoms can be milder and can help you avoid more severe complications. It can also help reduce potential time spent in the hospital, which to me is reason enough.  I definitely don’t want to be sick and a big hospital bill is even less appealing. Even more, it can help take the burden off older people with less disposable income who can’t afford those kinds of bills.

Where To Get Flu Shots 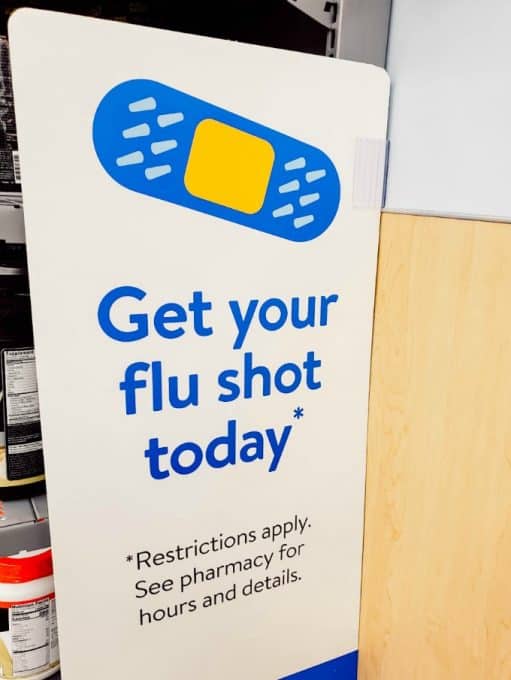 The good thing is that getting a flu shot is super easy. My husband and I got our shots at our grocery store pharmacy. They even gave us a $10 grocery gift card for doing it! You can swing by your doctor’s office, freestanding pharmacies or pretty much any store that has a pharmacy inside. Many have signs letting you know it’s offered but you can always ask the pharmacist.

It only takes a few minutes and the piece of mind you’ll get is totally worth it. I always feel a little relieved afterwards, knowing that we’ve significantly lessened our chances of getting the flu. Plus, if we get flu, we are less likely to pass it on to others.

Does your family get flu shots every year? Have you gotten them yet this year? It’s not too late!

The post Why It’s Not Too Late To Get Your Flu Shot appeared first on Fun Money Mom.