No one deserves to be made fun of, yet it happens all too often.

If you can’t say something nice about or to a person – don’t say anything! It is really that simple!

A video featuring a group of heartless girls shaming an overweight person at McDonald’s was viewed nearly 400,000 times on YouTube, around 69,000 people left comments.

Watch the video and see what you think. Do you think it is real or staged?

If you guessed it was staged, you are correct. It was a prank made by the YouTube channel Trollstation.

The group reportedly ‘performs’ social experiments on members of the public and records their reactions.

Take a look at this video

I don’t think we need to go around and insult people just to see what other people will do.

Why don’t we go around and help people and see how bystanders react? Set a good example, not a bad one. 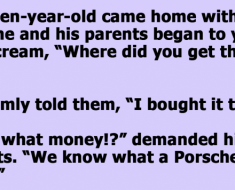